Fundraiser in memory of Walt Lambert 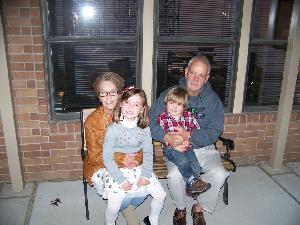 My dad with my mom and his 2 joys of life, his grandkids

If you have found this page, more than likely you know who I am, but if you do not, I am Angie, Walt's daughter and the youngest of his & mom's 2 children. I have an older brother Gary who lives in Houston, TX and me in Northern Kentucky.

On May 23, 2015, my dad suffered from a sub-arachnoid hemorrhage as the result of a brain aneurysm rupture. The morning of May 23, 2015, he left my place in Northern Kentucky and drove the 1,000 miles back to Houston with my mom and his beloved boxer Armored. Once home he unloaded and had a couple of adult beverages with his neighbor. He went to sleep rather early that night and woke my mom up with a severe headache. He took Tylenol to hopefully help and went back to bed (knowing my dad, he probably thought the headache was from just driving the 1,000 miles). He then woke up again and woke my mom up and at the time she called the ambulance because he was in excruciating pain. Once he arrived at the hospital he had no brain function.

My dad was born in Cincinnati, OH and grew up in the community of Sayler Park (West Side). He married my mom Mary Lou and had my brother and I. He was an accountant in the oil & gas business and after being transferred to New Jersey we as a family ended up in Houston, TX. My dad was very active. While living in Houston he ran the Houston Marathon twice. He coached and mentored 100s young women while coaching softball and won the elusive national championship. He never met a stranger and if someone needed help (friend or foe) he would always be there to help.

In October 2016 I decided to change my life and dedicate to getting in better health which was one of my dad’s wishes. After losing A LOT of weight, I set a goal to run a 5K in memory of my dad. On Saturday, July 14, 2018 in the community (Sayler Park) he grew up in they will be having a 5K, I will be running (at least trying to run the whole thing) the 5K. After talking to many friends I have decided to attach a fundraiser to the 5K.

Click the RED button on the right at the top of the page. Your donation is secure and can be completed safely online! Be sure to leave a message!

You can read more about what the Brain Aneurysm Foundation does here, as well as on their official webpage.

If you cannot make a donation at this time, please forward this link to everyone you know. Post this on your Facebook and Twitter pages. Every donation counts, no matter what the amount.

Where is your donation going?

The Brain Aneurysm Foundation is the world's only nonprofit organization solely dedicated to providing critical awareness, education, support and research funding to reduce the incidence of brain aneurysm ruptures.

All proceeds go towards:

With your support, we can start making a real investment to help fight the devastation caused by brain aneurysms and save lives. All donations are tax-deductible and every dollar raised goes to help support the mission of The Brain Aneurysm Foundation.

Too many people have been lost to brain aneurysms. Awareness leads to prevention; no one has to suffer or die from a brain aneurysm rupture.

Thank you for your thoughtfulness. Your generosity and support is greatly appreciated.

Your login information was incorrect. Please try again or click here to have your information emailed to you.